When you book with an account, you will be able to track your payment status, track the confirmation and you can also rate the tour after you finished the tour.
Sign Up
1311

WHY BOOK WITH US?

Itineraries are simply an indication of what’s possible. Our team will tailor any program to suit your requirements, travel dates and budget. Get in touch with us!

Imagine standing at the top of the Earth, glass of champagne in hand – and everywhere you look is south. That is the essence of the 13-day North Pole: The Ultimate Arctic Adventure aboard 50 Years of Victory, the most powerful nuclear icebreaker in the world. Crush through multiyear ice on the Arctic Ocean, sight see by helicopter on the lookout for walruses, seals, whales, and polar bears, or take a tethered hot-air balloon ride at 90º N, weather permitting. Possible stops at the island of Franz Josef Land will have you in awe of the flora and fauna as you visit seabird colonies and retrace the footsteps of early explorers

The Russian name of the vessel 50 Let Pobedy means 50 Years of Victory. Powered by two nuclear reactors generating 75,000 horsepower and capable of crushing a clear path through multi-year ice up to three meters thick, she is the largest and most powerful icebreaker ever built.

Welcome to the city of Murmansk on Russia’s Kola Peninsula, starting point of our adventure. Upon your arrival at the airport we provide a transfer to your hotel, which has been arranged by us and is included in the price of the voyage.

Murmansk is easy to reach by regular flights with stopovers in Moscow or Saint Petersburg. You may wish to extend your stop in Moscow. ( Contact us and we will make the arrangements)

Today we provide a group transfer to the port where we welcome you aboard the nuclear-powered icebreaker 50 Let Pobedy. Explore the ship and get orientated as we slip our moorings and sail north out of Kola Bay

Nowhere can it be more truly said that “getting there is half the fun”. As we cruise northward through the Barents Sea there is always the possibility of seeing whales. Meanwhile, you have the opportunity to learn about the unique icebreaking capabilities of the ship. You are also treated to a tour of the engine room.

As we make our way across the ice cap, you witness firsthand the ship’s awesome power as massive ice blocks give way under the enormous bulk of the spoon-shaped bow. The sensation of being on deck at this time is surreal and unforgettable.
We also take advantage of 24-hour daylight to offer helicopter flightseeing tours. From the air you can observe the ship crushing a path through the ice. You also have a unique vantage point from which to witness the stunning beauty of this vast polar icescape

Welcome to the geographic North Pole! After carefully navigating to 90 degrees North, we ceremoniously drop the anchor on a sturdy stretch of ice and disembark onto the frozen sea.

Now is the time to experiencing the long-anticipated thrill of standing at the top of the world. Join hands with your fellow passengers and literally walk around the world during our special International Round Dance. You are also treated to a barbeque meal on the ice. You may even have the chance to take a plunge into the icy water!

After our memorable time at the North Pole we turn around and head south. But the adventure is not over yet. The High Arctic archipelago of Franz Josef Land is still to come!

The Franz Josef Land archipelago, part of the Russian Arctic National Park since 2012, is a nature sanctuary. Polar bears and other quintessential High Arctic wildlife—such as walruses and some rare whale species—can be spotted anytime, anywhere in and around Franz Josef Land. Scree slopes and cliffs around the islands host enormous nesting colonies of migratory seabirds such as guillemots, dovekies, and ivory gulls. We take advantage of 24-hour daylight to exploit every opportunity for wildlife viewing and excursions via Zodiac and helicopter.

Franz Josef Land is home to some interesting geological features, such as the mysterious stone spheres on Champ Island. Collectors of geographical extremes may take note that Cape Fligely on Rudolf Island is the northernmost point of land in the Eastern Hemisphere.

Franz Josef Land also offers visitors the opportunity to walk in the footsteps of famous polar explorers at well-preserved historical sites. The journals of explorers such as Julius von Payer, Benjamin Leigh Smith, Frederick George Jackson, and Fridtjof Nansen come alive at Cape Norway, Cape Flora, Eira Harbour, and Cape Tegetthoff. Memorials, monuments, crosses, and the remains of dwellings are testimony to incredible historical events that are further illuminated by our expert lecturers.

Tikhaya Bukhta is currently a Russian Arctic National Park ranger station occupying Soviet-era research buildings and was also a major base for polar expeditions. Nearby, the fascinating columnar basalt cliffs of Rubini Rock are home to thousands of nesting seabirds.

The Polar Regions are perhaps the most photogenic on earth, with countless beautiful scenes presenting themselves every day. Endless expanses of ice, beaches crowded with seals or penguins, sunsets over unbroken horizons, starlit skies, and even the majestic northern lights – they all present fantastic photographic opportunities – and in order to make sure that you come home with some spectacular images we offer you the chance to learn and practice your photography alongside an experienced professional

After our amazing time in Franz Josef Land we cross back south through the bountiful waters of the Barents Sea. Presentations and workshops by our expert staff ensure that these days at sea are not idly spent. You may also take advantage of onboard facilities and amenities such as a polar library, volleyball court, gym, two saunas, warm seawater pool, gift shop, and massage treatments. Seabird viewing and whale sightings can be enjoyed from panoramic open decks as well as exterior stateroom windows.

Our once-in-a-lifetime journey comes to an end. After breakfast we say farewell in Murmansk. We provide you with a transfer to the airport for your flight home. 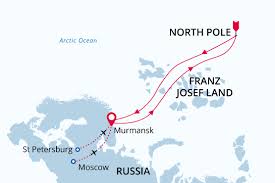 An introduction to Colombia

From$6,437 per adult
9 days 8 nights
0
HI, how may I help you?
Please feel free to contact us via Whatsapp for any enquiries.
Powered by